You are here: Home / Key Articles / The Resurrection of Jesus

Oddly enough, I find yourself in screaming agreement with many of my atheist friends on the nature of death and the state of the dead. Where we disagree, perhaps, is on the question of whether or not there is a God (or god) who can bring somebody back from the dead and whether or not there is historical evidence that he has done so at least once in the case of Jesus of Nazareth. Following on from that it is pertinent to ask, is there grounds for believing he can and will do the same for us sometime in the future?

The evidence for the historical reality of the resurrection of Jesus of Nazareth has been debated back and forth over the centuries in more detail than I have time to go into here. I can think of several lines of argument worth pursuing.

The Gospels Witness to the Resurrection of Christ.

Traditionally it is said that Matthew wrote as an eyewitness, Mark recorded the memoirs of Peter, Luke investigated the historical sources thoroughly and John, The beloved disciple, was himself also an eyewitness.

Sceptics argue that the Gospels are late compositions that did not see the light of day until the second century of our era. If so, it is suggested, they do not in the least represent the testimony of eye-witnesses. The facts are against the sceptic in this instance. The internal evidence from within the Gospels themselves supports a much earlier date (Some would argue that the entire New Testament was written before AD 70). The external evidence backs this up: The immediate successors of the apostles possessed these Gospels and considered them authoritative.

One can see differences of perspective among the Gospel writers, in matters of detail they do not always appear to agree with one another, but it is clear that each of the Gospels intends to put forward the belief that Jesus of Nazareth died, was buried, and rose again from the dead.

Given that these Gospels can be shown to be fair of face and to have been kept in reasonable custody they should be allowed to speak for themselves as evidence that Jesus did indeed rise from the dead.

Evidence for the Resurrection of Jesus

In “The Historicity of the Empty Tomb of Jesus”, Dr. William Lane Craig puts forward the following apologetic in favour of the fact of the empty tomb:  An examination of both Pauline and gospel material leads to eight lines of evidence in support of the conclusion that Jesus’s tomb was discovered empty:

The Resurrection of Jesus: The Lack of Veneration at the Tomb

The lack of veneration at the tomb of Jesus suggests that Jesus really did rise from the dead.

The veneration of saints is still practised by the Eastern Orthodox Church, the Roman Catholic Church, and by some members of the Anglican Communion. Veneration is often shown by bowing or making the sign of the cross before a saint’s icon, relics, or statue. Such acts of devotion are often done at the tomb of a deceased saint. Likewise, in first century Palestine, it was not uncommon for Jews to show veneration at the tombs of prophets and other great men and women of God.

There has never been any tradition of veneration at the tomb of Jesus, presumably because it is the case that from the earliest of days it was universally recognized that Jesus’ corpse no longer remained in the tomb.

The Resurrection of Jesus: The Testimony of Women

If you are aiming to start a new religion, or revolutionize an old one, you should, as they say, put your best foot forward. One thing the Gospels agree on is that it was a group of women, the female followers of Jesus who first discovered the empty tomb and brought news of it back to the as yet unbelieving disciples. At the same time it was to a woman that Jesus supposedly made the first of his post-mortem resurrection appearances (John 20:10-18). Given that at the time, Jewish custom regarded the testimony of women as practically worthless this would not seem to be best foot forward if one were unconstrained by the facts of history.
In light of the awkward, even embarrassing nature of the fact that the first testimony to the empty tomb and the resurrection of Jesus came from a woman, it is highly likely that had the Gospel writers been inclined to exercise editorial creativity, to the detriment of historical accuracy, they would have done so here.
The fact that they did not expunge the record is evidence of their intention to be faithful to history in recording the story of the empty tomb and the resurrection of Jesus.

The Resurrection of Jesus: The Initial Unbelief of the Disciples

Another of the standout features of the Gospel resurrection of Jesus narratives is the almost obstinate unbelief of the disciples, at least initially. This despite Jesus’s claim that the Jewish Scriptures predicted his resurrection and that Jesus, on more than one occasion, had told them he would die and rise from the dead.
The early followers of Jesus were not convinced at first. The two on the road to Emmaus (Luke 24:25, Mark 16:12, 13) had given up and were going home, even after having heard rumours of his supposed resurrection from the dead. The Eleven did not believe the women who reported to them that the tomb was empty (Luke 24:11; Mark 16:14). Their words seemed like nonsense to them.

Even when at last Jesus appeared to the gathered disciples in the upper room (Luke 24:37-41) they were not predisposed to believe. They thought they were seeing a spirit and they were frightened. Jesus responded by showing them the physical evidence of his wounds. Thomas was not present with them at that time. He flatly refused to believe (John 20:25-29). It was not until Jesus invited Thomas to touch his nail-scarred hands and wounded side that Thomas believed.
What can account for the dramatic transformation of these disciples from unbelief to belief?
I submit that only an actual encounter with the resurrected Jesus would be sufficient to bring about such a change!

The Resurrection of Jesus: The End Time Before Time

The death of Jesus, while it might have discouraged his followers, devastated them even, it could easily have been weaved into the framework of the conventional Jewish apocalyptic drama: Jesus suffers and dies as a prelude to his and our entrance into the coming kingdom. We now await the final end-time scene at which point Jesus and all his faithful followers – will be resurrected to reign with him in the kingdom of God. There is no need to weave into the narrative the idea of an empty tomb, nor the idea that Jesus has been raised, as it were, before time.

Only the fact of the empty tomb and the post-mortem resurrection appearances of Jesus could ever have suggested to these orthodox Jews the idea that the resurrection of the dead had already begun with Jesus.

The Resurrection of Jesus: The Idea of Christ’s New Body

The resurrection of Jesus: The idea that Christ would rise in a new and totally transformed resurrection body was to the disciples a totally foreign concept. These tough and very down to earth Galilean fishermen had enough trouble believing the mere fact that Christ would die and then be raised again, without having to cope with the idea that he was raised having a totally different kind of body, the kind of body that could pass through walls and into locked rooms (John 20:24-29). It is inconceivable that the early Christians should have fabricated such a story, which is so out of sync with what would have been their own cultural expectations, and even today sounds like science fiction to many. The more plausible explanation is that they were just relating the truth as they saw it.

The Resurrection of Jesus: The Transformed Lives of the Disciples

Aside from an actual encounter with the living and resurrected Christ how can we account for the changed lives of Jesus’s earliest followers? Peter went from publicly denying that he ever even knew Christ to boldly proclaiming the resurrection in the streets of Jerusalem. Thomas was a doubter until he touched and was touched by the risen Lord. James, the brother of Jesus, was in a position most likely to despise and reject him. Who believes their brother is the Messiah? Yet Christ appeared to him also (James 1:1, 1 Corinthians 15:7) and he gave up his life for the conviction that his brother Jesus truly was the resurrected King of Israel. 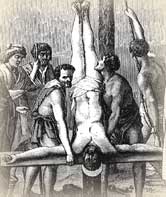 Tradition tells us how most of Jesus’s original followers, whom he designated Apostles, eventually died for their faith in Christ: Peter was crucified upside down. Andrew too was crucified; Matthew died by the sword. John alone died of natural causes, though he spent years in exile. James, the son of Alphaeus was crucified, as was Philip and Simon. Thaddaeus was shot through with arrows; James, the brother of Jesus, was stoned (with rocks); Thomas was run through with a spear; Bartholomew was crucified and James, son of Zebedee, died by the sword.

We can trust the testimony of these disciples. They would not knowingly have died for a lie. Something transformed them from the cowards that some of them were, to the faithful martyrs they became. What was that something if not the resurrection of Jesus Christ?